Midwest Living – Smoke on the River

For slow-smoked bliss, no city tops the Missouri River metropolis of Kansas City, where every meat is on the menu and the world’s top pitmasters gather each fall to prove who barbeques the best.
Writer: Trevor Meers; Photographer: Nate Luke 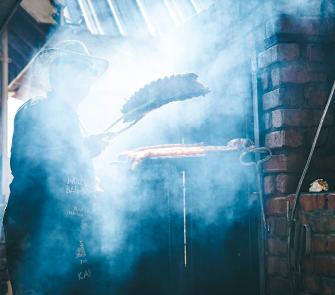 A three-chambered brick smoker dominates the patio of Woodyard Bar-B-Que.

Future family events will get very awkward if apple pie hears me talking like this, but it’s time to share the truth: If you’re seeking America’s culinary soul, don’t bother looking in the sweet aura of your mom’s oven. Instead, poke your head into some grimy joints where bass guitars rattle windows glowing sultry with neon. Peer through the iron doors of smoke pits tended by folks who know far more than they’ll share about smoldering hickory. Get lost on a few backroads and alleys.

In short, go get some barbeque, which is a taste of democracy itself. ’Cue is the everyman cuisine, specializing in hardworking muscles like shoulder and brisket once rejected as too tough by the moneyed folks. The alchemy turning this leaden protein to gold is patience, an asset that knows no tax bracket. By cooking meats low and slow over local hardwood, America’s working classes created an up-by-their-bootstraps delicacy.

And no town taps barbeque’s populist potential like Kansas City. Spend a weekend among the 100-plus barbeque joints (especially during early October’s epic American Royal World Series of Barbecue), and smoky ghosts cling to your clothes, betraying your itinerary. After my tour of metro pitmasters, I noticed that even my camera’s strap carried a whiff of someone lifting a smoker’s metal lid. Inside the camera, photos revealed a journey celebrating all comers, stretching from sketch neighborhoods and paper plates to white tablecloths and wine lists. 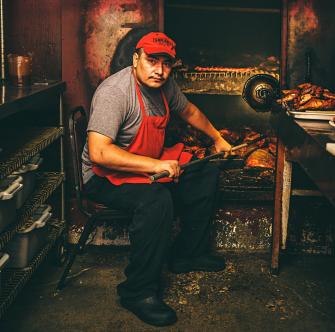 Range, after all, is Kansas City’s signature contribution to barbeque culture. In Texas, overrun by longhorns and big attitudes, little but beef brisket matters. The Carolinas and Memphis fixate on pork. But KC welcomes everyone, whether you’re seeking ribs, brisket, pulled pork or a Henry VIII-style turkey leg. “If it walked, flew or swam, people in Kansas City would throw it on a smoker,” says Adam Gerry, a local who co-writes the No Bull BBQ blog. For that, today’s diner can thank Kansas City’s stockyard heritage, which turned the city into a barbeque ark filled with animals waiting to meet a smoker.

For a working museum of the heat beneath the meat, stop at Woodyard Bar-B-Que on the Kansas side of town. A three-chambered brick smoker dominates the patio of a small house-turned-restaurant, and out back, past the bocce ball court, a gallery of stacked firewood awaits. Hand-painted signs mark hickory, apple, cherry, pecan and even New Mexico piñon. Here stands the legacy of Frank Schloegel, wood supplier to most of Kansas City’s pitmasters circa 1950. Over time, Frank recognized his daily travels as part delivery route, part apprenticeship in ’cue. Inspired, he built his own smoker, entered the restaurant business and created a new stop for outdoor-dining pilgrims.

Around the time of Frank’s epiphany, another landmark took root near Belton in south Kansas City. In 1956, William Snead built a 10×10 brick room and lit a fire under the floor’s metal grate. Today, pitmaster Matt Gfeller, who began working a pit at 15, tends a legacy proving that when you find a perfect harmony of wood, meat and the room where they meet, you don’t tinker with it. Matt swings open the metal doors of Mr. Snead’s pit and disappears in the smoke. He pushes a pitchfork deep into the black and retrieves a rack of ribs glistening with the “bark” of a perfectly cooked edge.

In other kitchens around Kansas City, you’ll spot plenty of cutting-edge, factory-built stainless­-steel smokers that inject a lot of certainty into the ’cue formula. But the joint where Mr. Snead still watches from a black-and-white photo—all lanky arms, white T-shirt and raw-boned Missouri commitment—demands a pitmaster’s intuition. When you describe the ability to produce consistent meat from the brick room on both a still, humid summer day and a blustery January afternoon, it’s hard to use a better word than art. 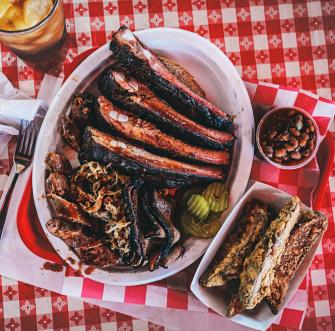 Inspiring as tradition may be, fortune and glory shove to the front of the motivation line during the first weekend of every October. The parking lot of the Kansas City Chiefs’ Arrowhead Stadium hosts the American Royal, the planet’s largest BBQ cook-off, where 2014 brought 562 teams from 36 states and 5 nations to compete for almost $100,000 in prizes. Under endless rows of pop-up canopies, cooks skip sleep for most of the weekend, hunting for a winning tweak. As they work, spectators watch for the edge that will turn their next cookout into a neighborhood legend.

The job of crowning smoke-pit royalty falls to 600-plus certified Kansas City Barbecue Society (KCBS) judges, all trained by the likes of Mike Lake, a certified “PhB.” Two days before the cook-off, I join 100 other prospective judges at American Royal HQ to learn from Mike, a Burl Ives look-alike who punches words like a drill instructor. Outlining the rules, he says, “There’s no such THING as a McRib in KCBS competition. If there’s rib meat without the BONE, the cook is disQUALified!” He softens when he comes to his favorite class of ‘cue, the bad boy that closes out every KCBS competition the way bull-riding caps every rodeo. “If you thought ribs were your favorite piece of meat,” Mike coos, “sooner or later, brisket’s gonna happen to ya.”

On Friday night—a giant party preceding the serious cooking—I move tent to tent chatting with showstoppers like the guy roasting a side of beef over a Visigoth-grade fire. I drop a mutual friend’s name at the tent of team Gonna Get Messy and get the nod to follow Greg Vincent through the back flap. Tonight’s ribs? Mere prelude. Come Sunday, he’ll pull out the big guns. Glancing around, he lifts a bottle of honey from a dark shelf. “It’s clover,” Greg says in a low voice. “And it’s made by a 13-year-old kid in Olathe. It’s the only stuff I’ll use for competition.”

He returns the bottle to its corner and slips back into the light, where the masses feast on trays of ribs, scarcely imagining the flavors waiting in Kansas City’s quiet corners. 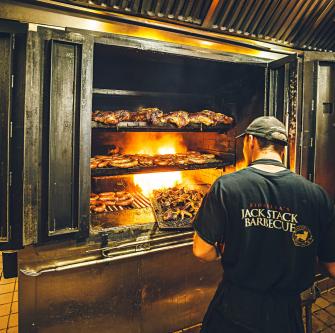 It takes years of saucy dining to speak credibly about Kansas City barbeque, but you can sample the city’s range in one gluttonous weekend with these selections. (We’re assuming you’ve covered the prerequisites by stopping at KC’s famed staples of Gates Bar-B-Que and Arthur Bryant’s.)

Snead’s Bar-B-Que Why tinker with what the 1950s perfected? Surrounded by farmland in nearly rural Belton, Snead’s is perfectly outfitted with wooden paneling, fading taxidermy and local old guys all left undisturbed by the new owners. Try either the burnt ends (“Brownies” in Snead’s parlance) or the Log sandwich filled with chopped pork and burnt ends.

Joe’s Kansas City Bar-B-Que Lines stretching outside are part of the ritual at this perennially hot restaurant in a Kansas City Shamrock gas station. An outgrowth of the Slaughter-house Five competition team, Joe’s (recently renamed from Oklahoma Joe’s) has three KC locations. But stepping up to the gas station counter and ordering a Z-Man, a brisket sandwich topped with smoked provolone and two onion rings, is the must-have experience.

Q39 Ignore purists who consider a place with bamboo plates and industrial design too image conscious for top-notch ’cue. Q39 (near the Westport neighborhood), owned by Rob Magee (career chef and top BBQ competitor), is far more than a pretty face. Favorites like the Angus burger topped with burnt ends join with sides that showcase a chef’s influence, like slaw filled with bits of apple and green onion.

Fiorella’s Jack Stack Barbecue When you need to pair a ’cue fix with impressing a client or a sure-fire date night, count on Fiorella’s for a pit-smoked evening with class that has earned consistent rankings as the city’s top barbeque restaurant. Wine lists and black linen napkins distinguish this blue blood’s multiple locations.

BB’s Lawnside BBQ Layers of faded posters chronicle the blues acts that keep any dust from settling on this wooden building on KC’s south side. The neighborhood is sketch, and the music loud. So don’t wander from the parking lot, and don’t come to chat. Just order a BBQ Sundae (beans, pulled pork and slaw layered in a Mason jar) and dig in as guitars blow suburbia’s rust out of your system.