Coming for the Throne (Eating Awesomeness)

When you listen to as much rap music as I do (or even if you don’t), you undoubtedly know about the massively overrated Jay-Z and Kanye West album entitled “Watch the Throne”. It has since become a bit of a punchline with some even saying things like “While you are busy watching the throne, I’m sabotaging it” in response to the album. By no means am I saying that the Kansas City BBQ scene is as colossally over-hyped as that album, because it is not, it is the best in the world. However, I am saying that there is someone coming for that throne.

The challenger is Q39 who some people will give about as much of a chance as people gave that skinny, pink haired kid that knocked out Kimbo Slice to accomplish the feat that he accomplished. I myself, after reading what my peers were saying about it, had almost decided that I was going to hate this place (which does not help my denial of hipsterdom in any way, but if I can’t be honest here, where can I be honest?). I am a huge KC BBQ homer! I even refused to eat at Dickey’s during Tour de BBQ on principle alone. I knew that this new kid on the block was being over-promoted and could not possibly live up to the hype. I was about as wrong about that as I have been about anything!
The crowd inside is very diverse, as with most restaurants on 39th street. You have the shirt and tie business folks taking a client out to dinner. You have the jeans and suspenders crowd that you would expect to see at Arthur Bryant’s, sitting with family. The prices are not that much more than you would pay for a comparable meal at a BBQ joint. And I will not bore you with the credentials of the Grand Champion Pitmaster that owns the joint or any of the other factoids that you have probably read elsewhere, I will get straight into what I had and I why you should give them a shot. 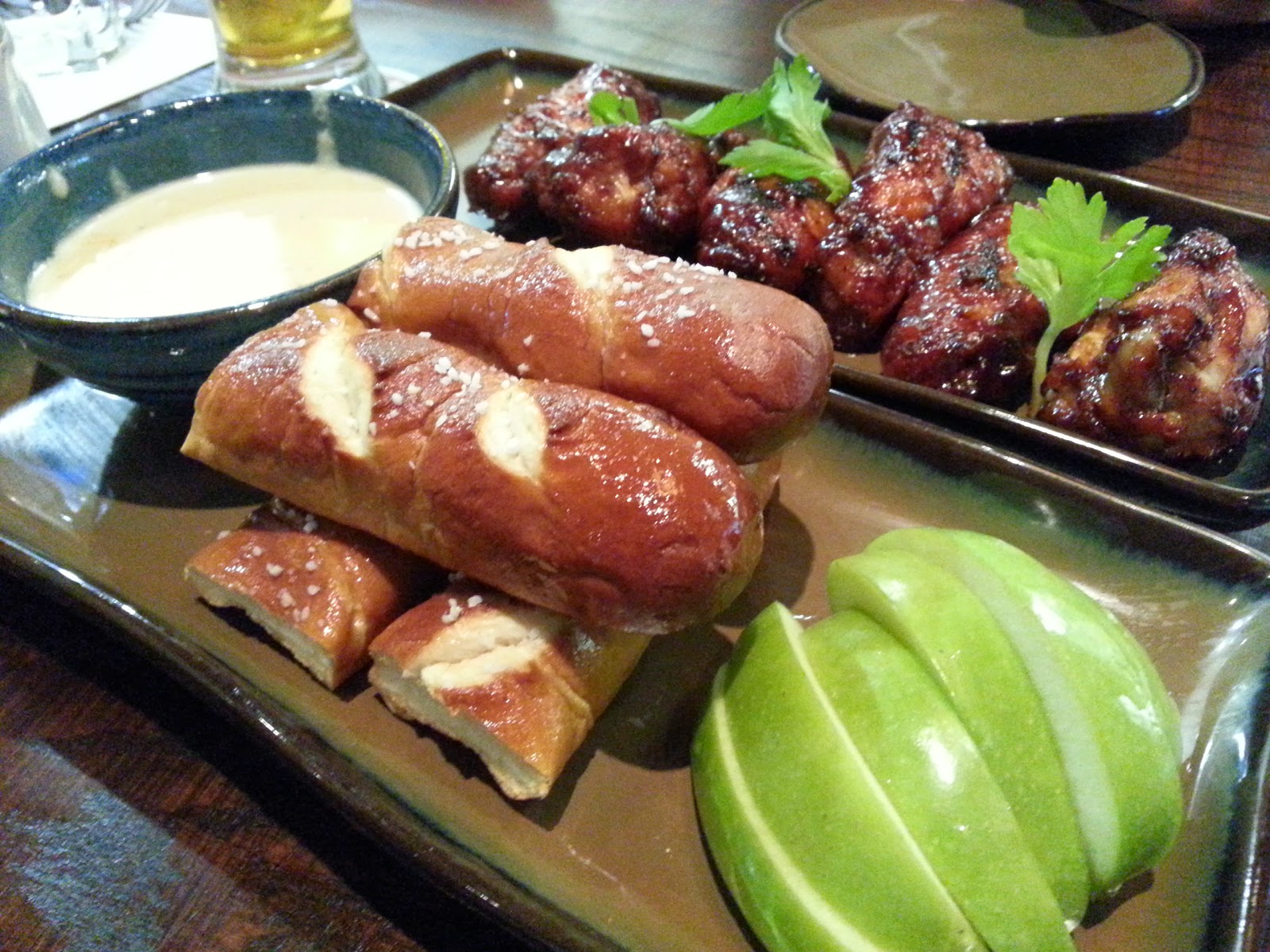 For starters: We had the Tall Grass Cheese Fondue and the Best Wings On The Planet. The Tall Grass Cheese Fondue is called “Tall Grass” because they use Tallgrass beer to make this 5 cheese fondue instead of the standard white wine. Accompany that with soft pretzels and a Granny Smith apple to dip in it and you have out of this world good! Melting Pot eat your heart out! The wings are made similarly to Peanut wings (brined-fried-sauced-fried-sauced-fried-sauced), but do not go into this thinking Peanut wings. They are very good, but I will not quite put them up on that high of a pedestal. To start with, these are BBQ wings opposed to the Peanut’s Buffalo style, these are also a lot more like what you expect as far as the size goes (not the whole pterodactyl wing like The Peanut’s). 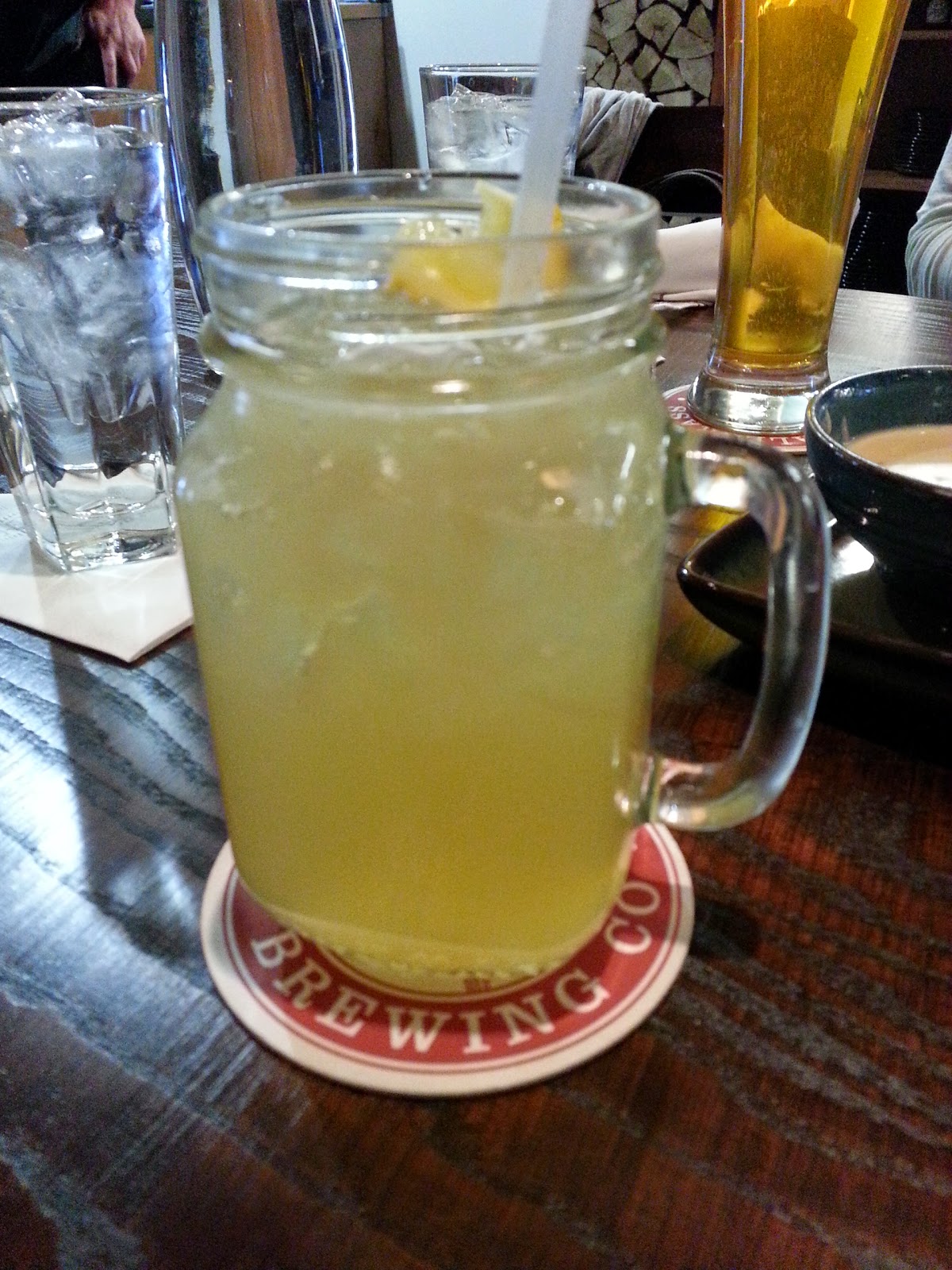 Bebidas: To stick with the Tallgrass theme, I decided to go with a beer cocktail to accompany my BBQ. I did not quite feel like a beer, but didn’t want something as strong as a cocktail either, so this seemed like the perfect spring compromise to me. My BC of choice was the Q Shandy. Although a prefer the name Radler to Shandy, I perceive it as a more active and manly name for a beer but there is no true difference besides whether you just got off of a bicycle or not, I went with it anyways… The Q Shandy is a deliciously citrusy concoction that is made with creme yvette and Tallgrass Velvet Rooster beer (a Belgian-style Tripel, one of my favorite styles of beer). 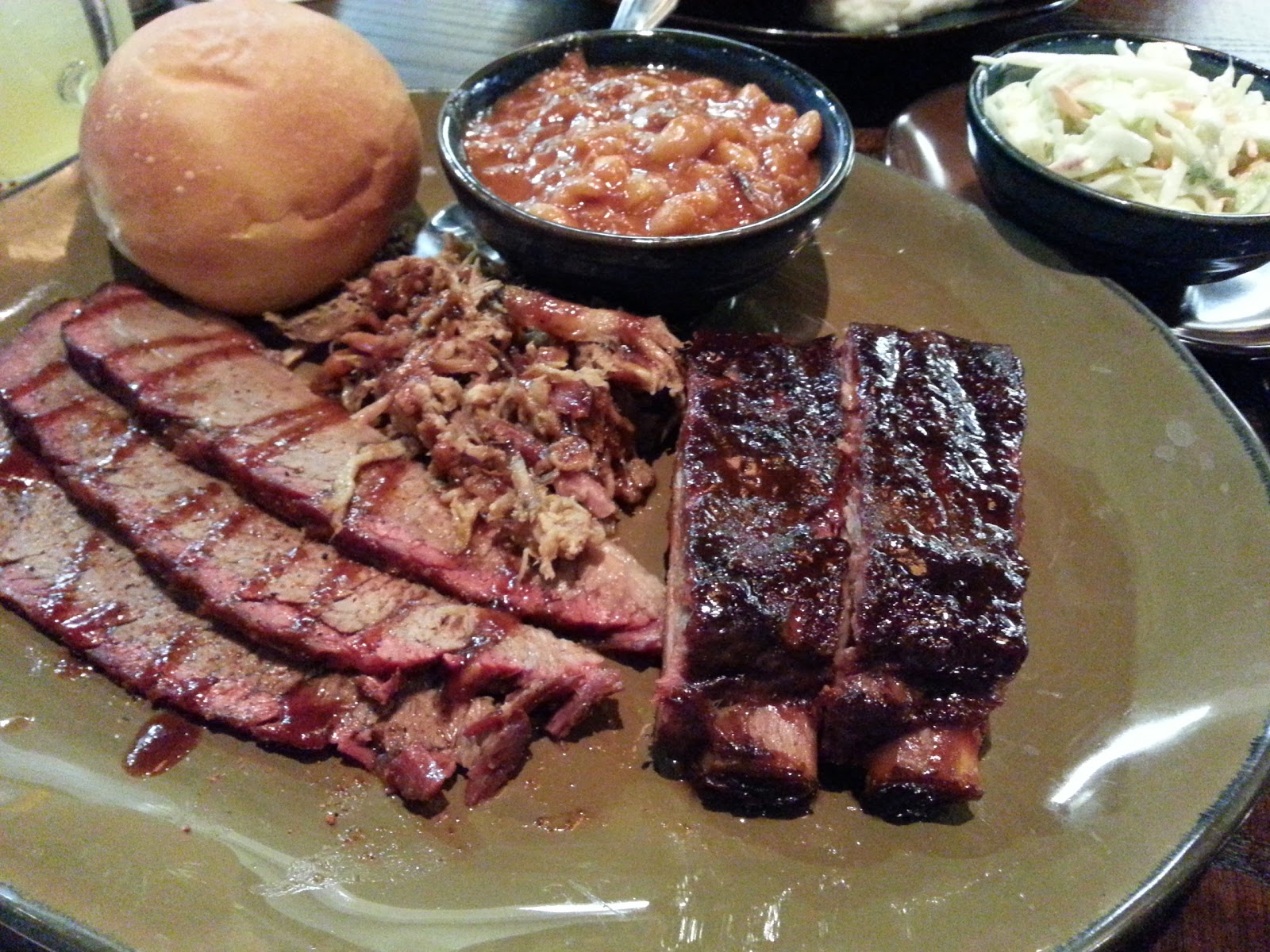 From the Smoker: I wanted to try just about every meat that I could, to get a true feeling of what Q39 really stood for, so I ordered the Judge’s Plate (but keep in mind you can still get very affordable BBQ sandwiches here too, if that is your thing). The pulled pork is very good, the brisket is tender and juicy, and the sausage is very flavorful as well. Any of these three meats are reason enough for you to come try Q39 and to this point I was thinking that Q39 was the BBQ joint anomaly that does everything so solid that you could not identify the student at the top of their class. That is when I bit into the ribs. Those ribs are so fantastic! They are right up there with McGonigle’s ribs, to me. They do not have a shallow pink ring around the outside, no, they are pink throughout! They are fall off the bone tender! I thought I was imagining things for a moment, so I had to go eat the ribs that I am about to compare them to the next day just to make sure, but they are even better than OK Joe’s ribs! Aaaaaaaand….. half of my readership just threw their computer across the room because they are so mad at me (in other words: 1 person has to buy a new laptop tomorrow).
The sides are pretty dang good too. The beans are no Jack Stack beans, but then again none are. They are still probably top 5 in my book and are very unique, they have a flavour about them that you might expect from a chili (not so much spicy, but more peppery). The apple slaw however WAS better than Jack Stack slaw, it is probably better than any slaw around! The tart and tangy flavours mixed with the creaminess of the slaw was a match made on eharmony.com. The slaw almost tasted as if you mixed a little bit of vinegar-based Carolina style slaw, some creamy KC slaw, cut up an apple and stirred it all together. 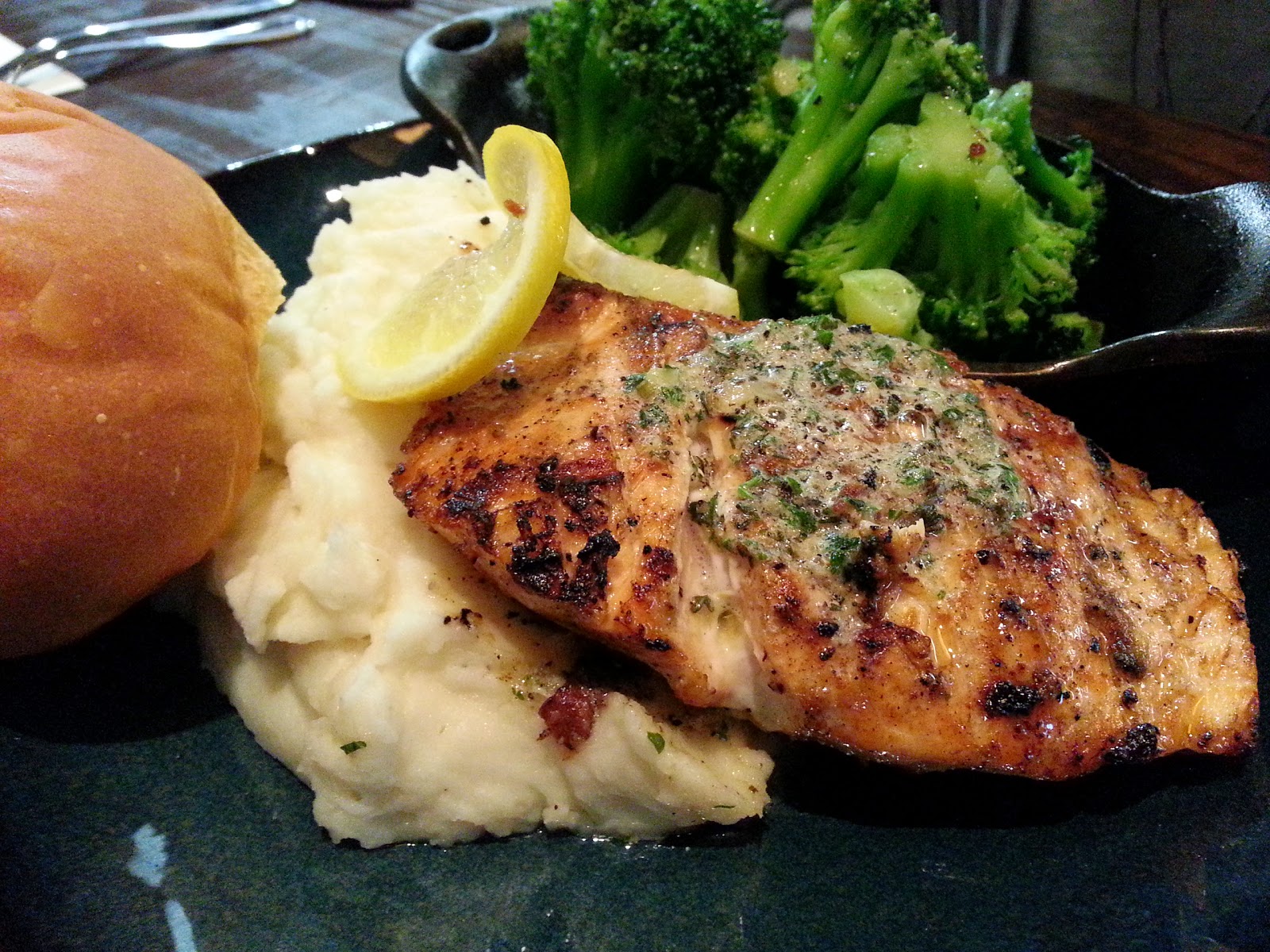 From the wood fired grill: Although most of what you will hear about Q39 initially will be about the BBQ and rightfully so, that is a pretty good litmus test, they also have a pretty stellar wood fired grill menu. Wifey had herself piece of salmon, cooked on the wood fired grill, that was as good of a piece of salmon as you can get in the middle of the map. Cooked perfectly, seasoned well, great tasting piece of fish!
The co-star of this movie was most definately the broccoli. Steamed and seasoned with fresh herb butter, this stuff was so good that I would even consider ordering it to go with my BBQ plate if I had to do it all over again, that is how good this broccoli was. 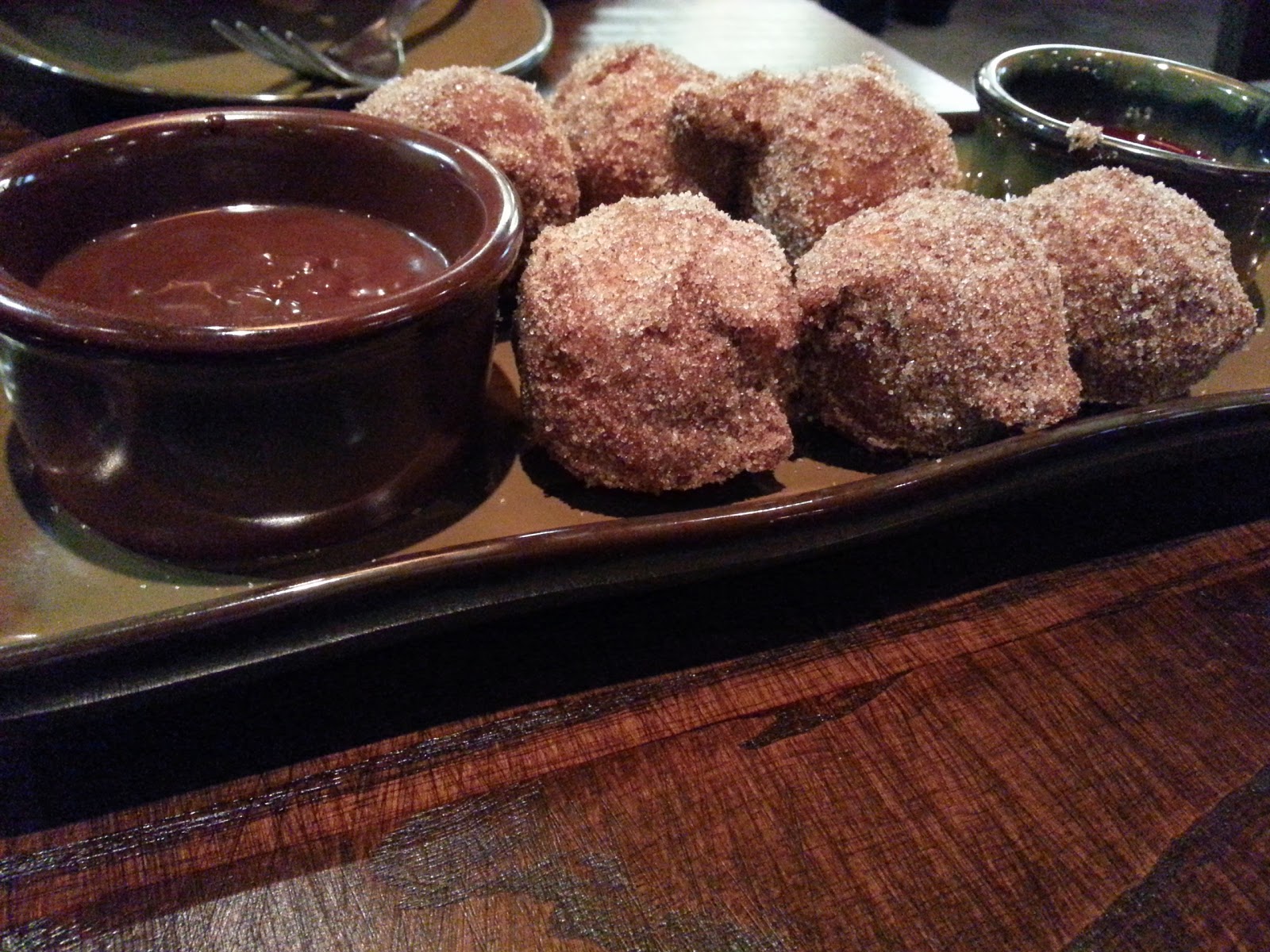 Dessert: To spoil the healthy dinner that my wife had just enjoyed I decided that we needed some of the made-to-order donut holes. Donuts are very in right now and I am very into them. I am like Homer Simpson when a donut is around. How much better can it get than a half dozen donut holes, fresh from the fryer, covered in cinnamon sugar and escorted by a chocolate dipping sauce and a fresh raspberry puree dipping sauce? Answer: not very. I am usually partial to chocolate, but I almost preferred the raspberry to the chocolate (probably because it is fresh raspberry puree). I found myself eating the majority of mine plain though, they are that good on their own.
Which does bring one last point to mind that I forgot to mention until this juncture. Q39 is a scratch kitchen. Everything is made fresh daily. The meat that is on your plate came fresh out of the smoker, it had not been sitting under a warming light. The ingredients are ordered in the smallest quantities possible to ensure that you are getting the freshest product every time. They may not have a line out the door at dinner time yet, but I would go ahead an try them out before they do because it is just a matter of time!